The "Shadow Corpse" (荫尸) brings misfortune to all descendants 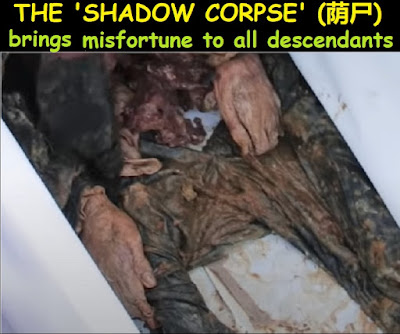 Many people, even the Chinese Folks, who are not well-versed in the Chinese Mystical Knowledge (中华玄学) , Taoist Folk Practice, Taoist Sorcery  or the knowledge of Yin House Feng Shui (Burial / Graveyard Feng Shui), have a misconception that an undecomposed corpse of  a late person,  means that the late-person  had done lots of good deeds and gained good karma when he / she was alive, therefore his / her body had become incorrupted.

That might be the case if the late-person was a monk or saint, not for the case of ordinary human being with living descendants.  - If it has happened to Your late elder family members, You should be worried, and not be amazed.

Most of the time, it is only when there are continuous signs of bad-luck occuring one after another in a very short period (within weeks or few months), befalling onto several members in a family,  such as fatal accidents and death from sicknesses, then they decide to consult a deity (in trance of spirit medium) from a temple, or a Taoist / Feng Shui Master. That is the only time when they  are told that the causes are due to the undecomposed body of an ancestor, which has turned into Yin Shi (荫尸) - "Shadow Corpse", which sucks their life energy.

Why do the burial of ancestors have great impact on descendants?

Many people never heard of the term 'Yin House' Feng Shui  (Graveyard/ Cemetery / Burial Feng Shui), let alone knowing how it affect the future generations. In fact,  in ancient time, "Feng Shui" was 1st started off to study the land area to bury the dead - The Book of Burial (葬书 Zàng Shū) , an 4th or 5th-century AD work, by the Taoist mystic Guo Pu (郭璞).

Although ancestors are dead and buried , but their aura is filled with a certain amount of space, and they are still silently affecting their living children and grandchildren. Broadly speaking, the closer the blood relationship is, the greater its influence. This is because the genetics of the ancestors and their offspring are very similar and have great commonalities, so it is easy to be affected from the aura.

In terms of Fengshui, the influence of ancestral grave Feng Shui on immediate descedants covers almost all aspects of life, such as wealth, marriage, children, health, official luck, etc.

Corpse that is not decomposed properly is called Yin Shi (荫尸) - "Shadow Corpse" , or  “养尸” - "Corpse Raising". There are two types of Yin Shi (荫尸): one is a dry corpse, the other is a wet corpse.

"Corpse Raising" (养尸) - The Corpse has shown the signs of  skin remains elastic, and the  hair, nails and teeth continue to growing bizarrely, as if they are "nourished" by some mysterious force, and this is the "life energy" derived from the descendents.

The Yin Shi (荫尸)  of an ancestor

- Will cause misfortune to all the direct descendants among 3 generations. The family members could die tragically, or died due to illnesses or meet with fatal accidents etc one after another, within short period of time (within weeks , or months) .

"Shadow Wet Corpse"- An undecomposed corpse that is still intact even after buried more than ten years, or even 20 years. The hair and nails continue to grow, and the clothes never rot.  In Yin Feng Shui perspective, this is caused by 'Vicious Ba Yao Sha' (恶性八曜煞) , or  known as, 'Huang Quan Sha Shui' (黄泉煞水) .

There are several ways to deal with 'Shadow Corpses':

Yellow Spring (黃泉) - In Chinese Culture, this means the land of dead. The place we all go after dead. - When a well is bored deep down into the ground, initially yellow water flows out.  It becomes yellow spring. After someone passed away, they were buried underground. Yellow Spring is used describe the land of dead or the Underworld.

To understand the terms and deeper understanding of the causes of the "Shadow Corpse" - Yin Shi (荫尸) , You need to have a Deep Knowledge of 'Yin House' (Burial) Feng Shui (阴宅风水) - Feng Shui For The Dead.