The Burglar's Greatest Regrets (7 In 1) Talisman 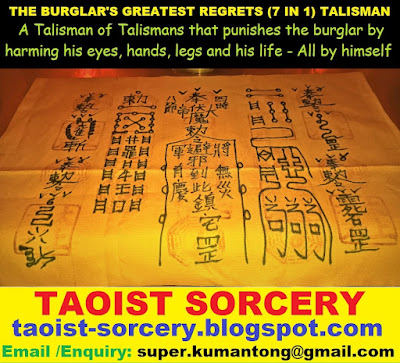 *A Talisman of Talismans that punishes the burglar
by harming his eyes, hands, legs and his life
- All by himself*
One Loyal Follower - C.Chin from USA asked:"Was wondering what talisman would you suggest for a friend who suffers from constant  targeted robberies, spying neighbors and such. She has shady neighbors who like to hack wifi and spy as well as enter her home when she is not present. - A talisman to curse whoever trespasses on the property. And is there a possible talisman to protect against hacking? The neighbor directly upstairs from her has severe stalking/sneaking behavior."
How the 'The Burglar's  Greatest Regrets (7 In 1)  Talisman' came into fruition..
He was told that I need time to brainstorm and then able to come up with a proper talisman (of several Talismans) that suit his friend's needs and purposes.
Finally, after 11 days of brain-storming and planning, I (Taoist Sorcery Master a.k.a Kumantong 4D Master) was able to come up with a talisman (of several talismans) that will hinder the burglar from performing his action and if he does so, he will be hurt very badly - from his eyes, hands, legs and even his life. All caused by his own actions. 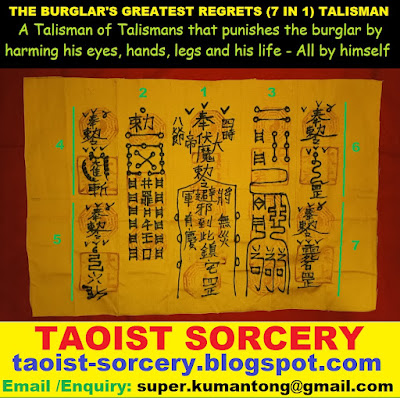 Explanation of the 'The Burglar's  Greatest Regrets (7 In 1)  Talisman'
The talisman is designed in such a way that... on the surface,  the talisman (of talismans) will be mistaken as a normal "home-blessing" talisman. Even to a Chinese person (who can read Chinese), by looking at the Talisman 1, he / she will think that the whole talisman is for "warding off evil spirits" purposes.
*Talisman 1 to 3 will cause the Burglars to become fearful and frightened, thus,  quickly leave without stealing*
Talisman 1 (For Burglary Prevention) - This is Taoist Sorcery Version of Burglary Prevention Talisman. It is to Call Upon Fu-Mo-Da-Di (伏魔大帝) - "The Great Heavenly Emperor that subdue the Evil Spirits" to send out the evil-warding heavenly generals (辟邪将军) to stay on guard throughout the 4 seasons (四时八节) - Meaning: 24hrs non-stop, throughout the whole year and beyond, to protect and guard the house from "Evil Spirits" Influences, so that there will be no disasters and have Celebrations (无灾-有庆).
This talisman looks as if it is for the sole purpose of  Protecting The Place / House / Premise from the spirits , instead of guarding against human folks with bad intentions.  In actual fact, this talisman's main function is used to prevent Burglary. Secondary benefit, is that it can also protect against  evil spirits.
Who is Fu-Mo-Da-Di (伏魔大帝)? - Guan Di (关帝) , is also known as Guan Sheng Di Jun (关圣帝君) , Dang Mo Zhen Jun (荡魔真君), Fu Mo Da Di (伏魔大帝), and so on. In this context, he is invoked and revered as Fu Mo Da Di (伏魔大帝).
Talisman 2 (For Burglary Prevention) -  This Burglary Prevention Talisman is derived from 'The Tai Shang (Lao Jun) Secret Talismans of Home Protection'.   (太上秘法镇宅灵符). This is an add-on spiritual power booster for Burglary Prevention. Work best in 3 in 1 formation -  Talisman 1 + 2 + 3.
Talisman 3 (For Burglary Prevention) - This Talisman is 'Thieves/Burglars Restraining' Talisman (镇盗贼符) derived from 'The  Emperor Wu's Book of Practical Talismans'. This is an add-on spiritual power booster for Burglary Prevention.  Work best in 3 in 1 formation -  Talisman 1 + 2 + 3.
If the burglar / burglars decide to carry on his / her / their business, the Talisman 4 to 7 will take effect. They will be in a good time of Rollar Coaster Disasters.
*Talisman 4 to 7 are derived from "The Taoist Sorcery Secret Method of Scrying" (道教圆光术).
- Scrying, also known by various names such as "seeing" or "peeping", is the practice of looking into a suitable medium in the hope of detecting significant messages  or visions.
Talisman 4 - Hurting Burglar's Life by his own actions
Talisman 5 - Hurting Burglar's Eyes by his own actions
Talisman 6 - Hurting Burglar's Hands by his own actions
Talisman 7 - Hurting Burglar's Legs by his own actions
How To use 'The Burglar's  Greatest Regrets (7 In 1)  Talisman'?
Short Video Of 'The Burglar's  Greatest Regrets (7 In 1)  Talisman'
Important Note: This is one of the more "expensive" talismans. If You are interested to own one for Your home or business premise, kindly email me to ask how much is the Fee to create and empower the same talisman for You. If it is over Your budget or You have a much higher budget, We can discuss and then customise a  suitable talisman (of talismans) that suit Your needs, at Your budget.
Important Side Note:
Long, long time ago, when there was no high-tech equipment like the hidden video cameras, Taoist Sorcery Masters were relying on  "The Taoist Sorcery Secret Method of Scrying" (道教圆光术) to seek for information  and clues.  The 'Taoist Sorcery Secret Method of Scrying' applies a lot of certain Taoist Talismans and chanting of magical incantations, pertaining to scrying ritual, in order to bring out visions, like watch a movie of actions (like the recorded video of hidden video camera).
After finding out the exact thieves / burglars from the scrying ritual,  the "Punishment Talismans" will be applied to hurt  and harm the Thieves / Burglars from a far distance (as if remote control), in order to punish them by themselves.
Due to existence of modern high-tech equipment, people are already using Hidden Video Camera to keep a watchful eye on their own home. Secondly, many people, even the mordern Chinese Folks, have never heard of  "Taoist Sorcery Method Of Scrying".
You get to know about it now because someone was asking for help by applying the "Spiritual Method of dealing with Burglary".
Take Note: There are many more different Talismans for prevention and punishment of Thieves / Burglars on different situations, which are not shown and shared here.
Share
‹
›
Home
View web version